ARTICLE: Demi Lovato on why she loves ‘messing’ with Simon Cowell – and how she’s not like Katy Perry 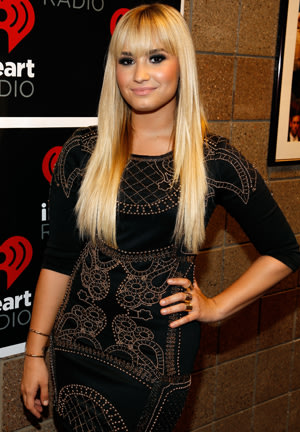 When we met up with Demi Lovato in New York City earlier this month, we had no idea what she’d look like when we arrived. Of course we’re very familiar with her work — and love watching her sass it up to Simon Cowell on “The X Factor” — but she’s become such a hair chameleon this year we weren’t sure we’d recognize her. We quickly discovered the 20-year-old is going through a blond phase — with bangs, no extensions — when we were brought in to meet her as she sat barefoot curled up on a couch.

“It’s crazy,” Lovato tells omg! about life as a blonde. “I never ever thought that I would go blond, but I’m having fun with it.” As for the bangs, I just feel like myself again. It reminds me of being 15 again — when I was doing ‘Camp Rock.’ I don’t know how long I’ll keep them, but for the meantime it just makes me feel like myself.”

After a difficult few years, which included a much publicized stint in rehab for emotional issues, including cutting and an eating disorder, feeling like herself is an amazing thing. And on “X Factor,” she seems right at home as she sits alongside Cowell, Britney Spears, and L.A. Reid critiquing aspiring singers. While the cranky Cowell — who is 33 years her senior — could be an intimidating person to go head-to-head with, Lovato seems undaunted when it comes to facing off against her boss. “I love messing with him,” Lovato laughs. “He’s really funny and I have a lot of fun working with him. But someone has to put him in his place. I mean — you can’t come to the United States from England and make fun of all of us! I have to stand up for my country.”

Something else Lovato is taking a stand against is bullying. She recently partnered up with Secret deodorant for their Mean Stinks campaign, which is an effort to bring an end to girl-on-girl harassment. “Well, it’s not a surprise,” she says of her involvement. “I’ve talked a lot about my past experiences. Most of my issues stemmed from the trauma of being bullied when I was 12 years old. I’ve also known people who have taken their lives because of bullying. It’s something I never want to see happen again. So if I can put an end to it, I’m going to do anything I can to stop it.”

Part of the campaign involves girls painting their pinky nails blue in a sort of pinky swear promise to end bullying, which led to a conversation about the celebrity nail art trend. Lovato says she’s not a fan. “I don’t like nail art,” she says. “I used to be obsessed — I’d have a cupcake on one finger and leopard on the other. These days I’m a pretty simple girl when it comes to nails. I either wear clear polish, black or dark red — that’s it.” So we won’t see her next album cover painted on her index finger? “I leave that to Katy Perry,” she smiles.

Speaking of her next album, Lovato is hard at work on her fourth one, which will be out next year. What can people expect? “I’m bringing the sound of real music back,” she previews, sharing that she has three or four songs completed. “I think Adele does a great job — they are catchy pop songs, but it’s real music and there are instruments. I want to bring a lot of that back. There’s going to be some fun, light-hearted songs with kind of a throwback sound. But I say one thing and then I spend like a month in the studio and it ends up being totally different, so I don’t know,” she laughs.

So how does Lovato find time to balance all her projects with maintaining a healthy lifestyle post-treatment? “I make time,” Lovato says, sounding much older than her years. “I’m a really dedicated person. And I know that if I work really, really hard now, I can get to the place that I want to be in my career so that maybe in a couple years — or whenever I make it to that level — I can take a break.” What would she do? “Travel the world. Spend a ton of time with my family. Maybe start a family,” she says, shooting out ideas fast and furiously before quickly adding, “Years and years down the road.”

Sounds like after a rocky road, she’s got things figured out.