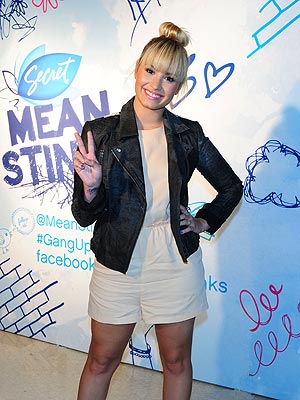 Demi Lovato has a secret to share: Growing up wasn’t always easy for her.

“I had a really tough time when I was in middle school,” the X Factor judge, 20, tells PEOPLE. “People would write ‘hate petitions’ [about me] and send them around to be signed. They’d have CD-bashing parties of my demos. They’d come to my house, stand across the street and yell things. It was a very emotional time for me, and all I wanted to do was get away.”

It was so bad, in fact, that Lovato believes it’s part of what led her to seek treatment for issues like an eating disorder and cutting nearly two years ago.

“Back then, there were times I didn’t think I’d be able to move on,” she admits.

Fortunately, Lovato has made it to the “other side,” and is now drawing on those painful experiences as the new ambassador for Secret’s “Mean Stinks” campaign, encouraging girls to “gang up for good” to end bullying in schools.

“I heard about the program last year, and thought it was such a great opportunity,” Lovato says. “They’re really trying to put an end to bullying.”

Thursday morning, the star surprised students at New York City’s Young Women’s Leadership School to talk to them about the program, which asks girls to pledge to have a “Drama Free School Year” by making a pinky swear, symbolized by wearing blue nail polish on their pinky fingers.

“I’ll definitely be wearing [the nail polish] starting soon,” Lovato says. “It’s a conversation starter: ‘Hey, why is your pinky blue?’ ‘This is a pinky promise that I’m not going to bully people, that me and my friends are ganging up for good.’ ”

To help, Secret will donate $1 (up to $150,000) from the purchase of every Mean Stinks Clinical Strength deodorant to the cause. Learn more about the program on Secret’s Facebook page.

Published by Kimmy
No comments
Appearances, Articles and Press