Demi Lovato: I Have Bipolar Disorder 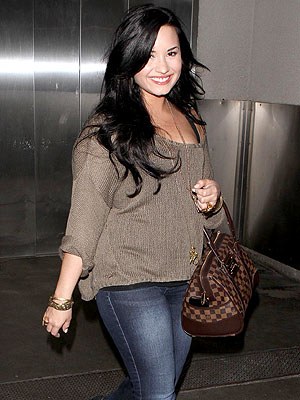 Three months after leaving a residential treatment center, teen star Demi Lovato is bravely opening up about her private struggles – not only with anorexia and bulimia, but also with bipolar disorder.

“I never found out until I went into treatment that I was bipolar,” Lovato told PEOPLE in a candid interview that took place last month in her L.A.-area home.

But during her three-month stay at a treatment center where she underwent therapy for anorexia, bulimia and cutting, Lovato, 18, who said she’s “battled depression from a very young age,” discovered why she was having trouble controlling her emotions and actions.

“Looking back it makes sense,” she says of her diagnosis. “There were times when I was so manic, I was writing seven songs in one night and I’d be up until 5:30 in the morning.”

“I feel like I am in control now where my whole life I wasn’t in control,” she adds.

The new revelation explains why when actress Catherine Zeta-Jones announced that she has bipolar II disorder, Lovato was quick to Tweet her support.

Now Lovato is taking the same brave step while discussing the “darkest time” in her life. “What’s important for me now,” she says, “is to help others.”

For more about Lovato’s fight to get healthy, her time in treatment and how she repaired her relationship with best friend Selena Gomez, pick up this week’s issue of PEOPLE.

ARTICLE: Tiffany Thornton: So Random Will Go On