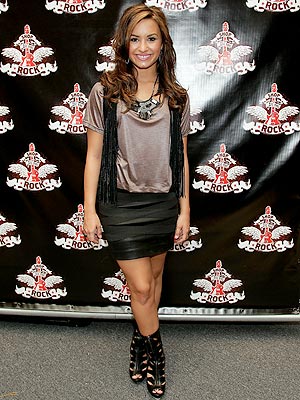 What do Disney star Demi Lovato,17, and Kim Kardashian have in common? Curves—and confidence. “I just love the way that she dresses,” Lovato told PEOPLE at the kickoff concert for Hot Topic’s “Shop Till You Rock,” a music-inspired mall tour and fashion event at the Glendale Galleria on Saturday. “She wears clothes that fit her body…I’ve been embracing my body as I’ve been getting older, I’m starting to have curves and I’m embracing it and kind of looking to her style to help me out with that.” Even though summer is still in swing, Lovato is already excited about fall style options. “I’m really excited about just fall in general–like the scarves, the handbags, the coats and awesome jeans, and boots, and tights,” says Lovato, who stars in Disney’s upcoming movie Camp Rock 2: The Final Jam and is touring with Jonas Brothers later this summer. No matter the season, Lovato keeps her skin fresh with just one simple rule: “I wash my makeup off every night [with] Clean and Clear,” Lovato, the new spokesperson for the line, says. “It’s the only face wash products I’ve been able to use that actually make a difference. It’s really great.” –Katherine Perry