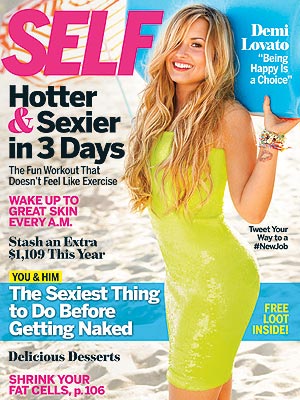 Demi Lovato is surprisingly candid in a new Self Magazine interview, where she talks openly about her past struggles.

Demi also answers the question on so many fans’ minds–are Demi and Selena Gomez still friends?

There was a time when Demi and Selena were absolute BFFs, but somewhere down the line, something changed between them and many believed they had a falling out.

Demi explains, “Selena and I aren’t as close as we used to be, but she’ll always have a place in my heart.”

It happens. Friendships change. But at least it’s good to know that Demi and Selena are still friends.

Demi also shares why she decided to be so public with her rehab treatment, her bi-polar diagnosis, having an eating disorder and why she was cutting herself.

She explains, “When I was younger, stick-figure thin was in and nobody was talking about eating disorders. I want girls to know that it’s OK when they grow up and their body changes. I want them to be aware that certain things they might do to lose weight can be dangerous–life-threatening, even.”

For more of Demi’s interview, read the August 2012 issue of Self Magazine and head over to Self.com for more quotes and a fun slidshow.