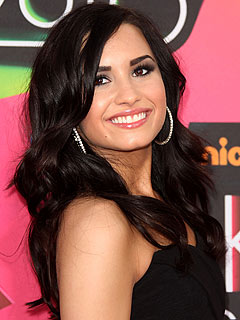 After being spotlight for trying to overcome “emotional and physical” issues, Demi Lovato celebrated her 19th birthday Thursday night with a private, Red Bull-fueled party.

The former Disney star, whose actual birthday is Saturday, teamed up with Sober Is Sexy clothing designer Hanna Beth for a joint birthday bash at Beacher’s Madhouse in Hollywood.

Lovato – clad in a silver spiked Marco Marco shoulder dress – made Sober Is Sexy and glam rock the themes of the party where guests included Derek Hough, Tiffany Thornton and Hunter Parrish.

“There was no alcohol, but an open Red Bull bar,” says a partygoer. “People who weren’t dressed glam rock weren’t admitted.”

The party was decorated with photos of her and Beth “all over the walls” and they each had birthday cakes.

“Demi mingled with everyone and was such a sweetheart,” the source says. “She danced on stage with Hanna Beth, drank Red Bull and danced a lot.”

Published by Emily
No comments
Articles and Press