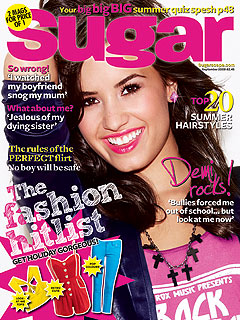 Demi Lovato may have recently split with Trace Cyrus, but she finds time to chat to her best friend – his sister, Miley – every day.

And what does the 16-year-old call Miley in those chats? “Dragon.” She tells the September issue of Sugar magazine (her first cover shoot in the U.K.) the nickname comes from “our fave film, Step Brothers.” She adds the megastar has “given me so much advice” to help her cope with fame.

“Recently she sent me this four-page text message encouraging me and telling me she has faith in me. It was so inspiring and made me feel great – because I do get a bit overwhelmed by the paps sometimes.”

As for her other celebrity pals, the Jonas Brothers, Lovato says, “Everyone asks me if I fancy them but I totally don’t!”

She can afford a joke now about the attention she gets, but it wasn’t so easy a few years ago. She says the bullying she endured at school stemmed from her new-found fame. “I opened a show for JoJo once and the next day my class passed round a petition to ‘Get Demi Out,’ and then handed it to me. It was pretty devastating.

“But the final straw was when I was chased into the toilets by girls threatening to punch me. I was so scared I called Mum – we decided I’d stay at home after that. But it made me more focused on writing my music and spurred me on to want success.”

She has been home-schooled since then, but she adds that she would like to go to college one day.

Lovato’s first steps on the road to fame were at a school talent show when she sang Celine Dion’s My Heart Will Go On from Titanic. “[It was] a pretty daring choice, I’m sure you’ll agree! Mum still describes that performance as ‘sweet’ – so I’m pretty sure she means I was awful!”

She still gets plenty of support from her family. “I get really emotional every time I have to leave them to go on tour, but luckily Mum and Dad take it in turns to go with me. I miss my sisters so much.”